A new theoretical model is proposed to unentangle a big conundrum discovered more than a half century ago in astronomy, reported in a paper published online in journal Monthly Notices of the Royal Astronomical Society (MNRAS) (Volume 497, Issue 2, September 2020, Pages 2190–2200; DOI: 10.1093/mnras/staa2061).

In 1965, Theodore P. Stecher, a scientist from Goddard Space Flight Center, Greenbelt, Maryland, USA, first observed a surprising round peak around wavelength 2175 Å when measuring stellar extinction energy distributions in the ultraviolet (UV) between 3000 and 1200 Å for five pairs of stars with a sounding rocket (ApJ, 1965, 142, 1683). Ever since, several satellite observatories have verified the existence of this bump feature in tens stars of the Milky Way (MW), and a lot of subsequent studies on numerous galaxies show that such a 2175 Å extinction bump feature in interstellar medium (ISM) is almost ubiquitous and pronounced in the MW. Recent astronomical observations also reveal that this mysterious 2715 Å dust extinction feature even exists in quasars. However, its exact physical origin such as chemical composition and physical properties of carriers for this UV bump is hitherto unclear after intensive explorations of more than a half century. Previous studies indicated that the 2175 Å extinction bump in ISM is attributed to small-sized grains of carbonaceous materials. Although a few conventional carbonaceous candidates including graphite, nongraphic carbon, diamond and polycyclic aromatic hydrocarbons were suggested to explain the physical origin, a consensus has not yet been achieved. Therefore, it remains a big puzzle at present towards explaining this mysterious bump in ISM.

Recently, a team from University of Chinese Academy of Sciences (UCAS), led by Prof. Gang Su, presented a neodoxy to explain the physical origin of this UV bump feature in ISM. They proposed a mixture model by which they exposed that the extinction bump in ISM is closely related to the clusters of hydrogenated T-carbon (HTC) molecules (C40H16), where HTC molecule is a totally new stuff among carbonaceous materials, and has intrinsically a sharp absorption peak at the wavelength 2175 Å. They further suggested that the chemical composition of dust carriers for this UV bump feature may include HTC, graphite, MgSiO3 and Fe2SiO4. By linearly combining the calculated absorption spectra of HTC mixtures, graphite, MgSiO3 and Fe2SiO4, they showed that the UV extinction curves of optional six stars in the MW can be nicely fitted. This work gives a completely new explanation different from previous models toward understanding the physical origin of the 2175 Å extinction bump in ISM of the Milky Way, which appeared online in MNRAS (DOI: 10.1093/mnras/staa2061).

Several years ago, Su et al. proposed a new carbon allotrope named T-carbon with anisotropic sp3 hybridized bonds and low density (Sheng et al., 2011, Phys. Rev. Lett, 106, 155703), which is formed by replacing each atom in cubic diamond by a carbon tetrahedron. This novel carbon allotrope has been synthesized successfully by different methods recently (Zhang J. et al., 2017, Nat. Commun, 8, 683; Xu K. et al., 2020, Carbon, 157, 270-276). The experimental UV-visible absorption spectra of T-carbon shows a prominent peak at the wavelength of 2250 Å, which is not far from 2175 Å. According to their calculations, T-carbon can be easily formed under a circumstance of negative pressure, clueing that it should be conducive to form T-carbon and/or its fragments (molecules or clusters) in interstellar space. These results indicate that T-carbon might be correlated with the interstellar extinction bump in some manner. Considering that the interstellar space is full of neutral hydrogen, it is the most possible that T-carbon in interstellar space may exist in the form of molecules or clusters passivated by hydrogen atoms, forming the hydrogenated T-carbon (HTC) molecules or clusters (Figure 1). 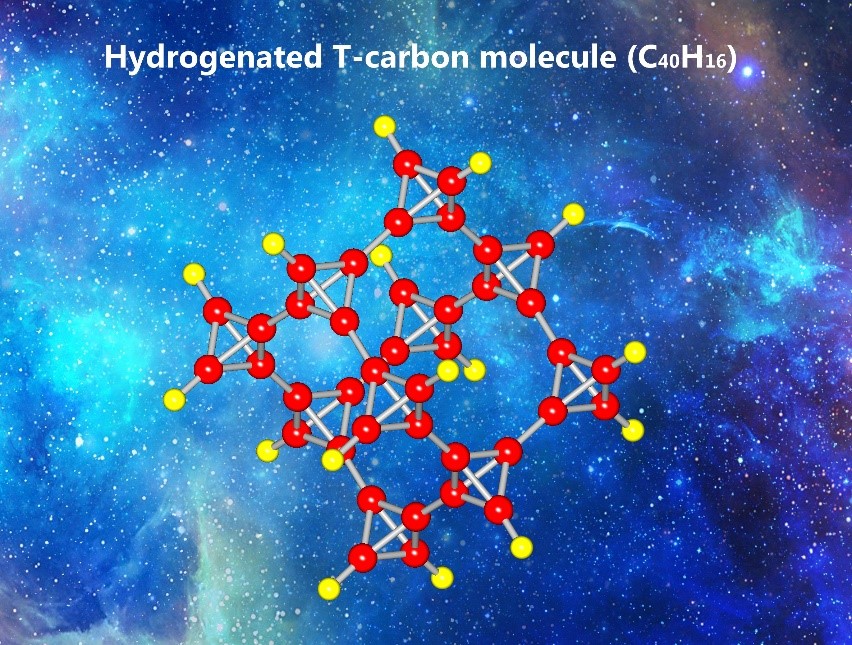 They calculated the UV absorption spectra of HTC molecule by density functional theory and discovered that there is a very sharp absorption peak at the wavelength of 2175 Å (the black line in Figure 2(a)), indicating that the physical origin of the interstellar UV extinction bump may be intrinsically related to HTC molecules or clusters. Since the UV bump feature should be caused by grains or clusters of carbonaceous materials, they then proposed a mixture model based on clusters of HTC molecules that still has intrinsically a marked absorption peak at the wavelength 2175 Å (the red curve in Figure 2(a)). Moreover, because silicate and Mg/Fe-containing olivines as well as graphite grains may also be the compositions of interstellar dust, the UV absorption spectra of fayalite (Fe2SiO4), enstatite (MgSiO3) and graphite should be considered (Figs. 2b-2d) for better fittings. 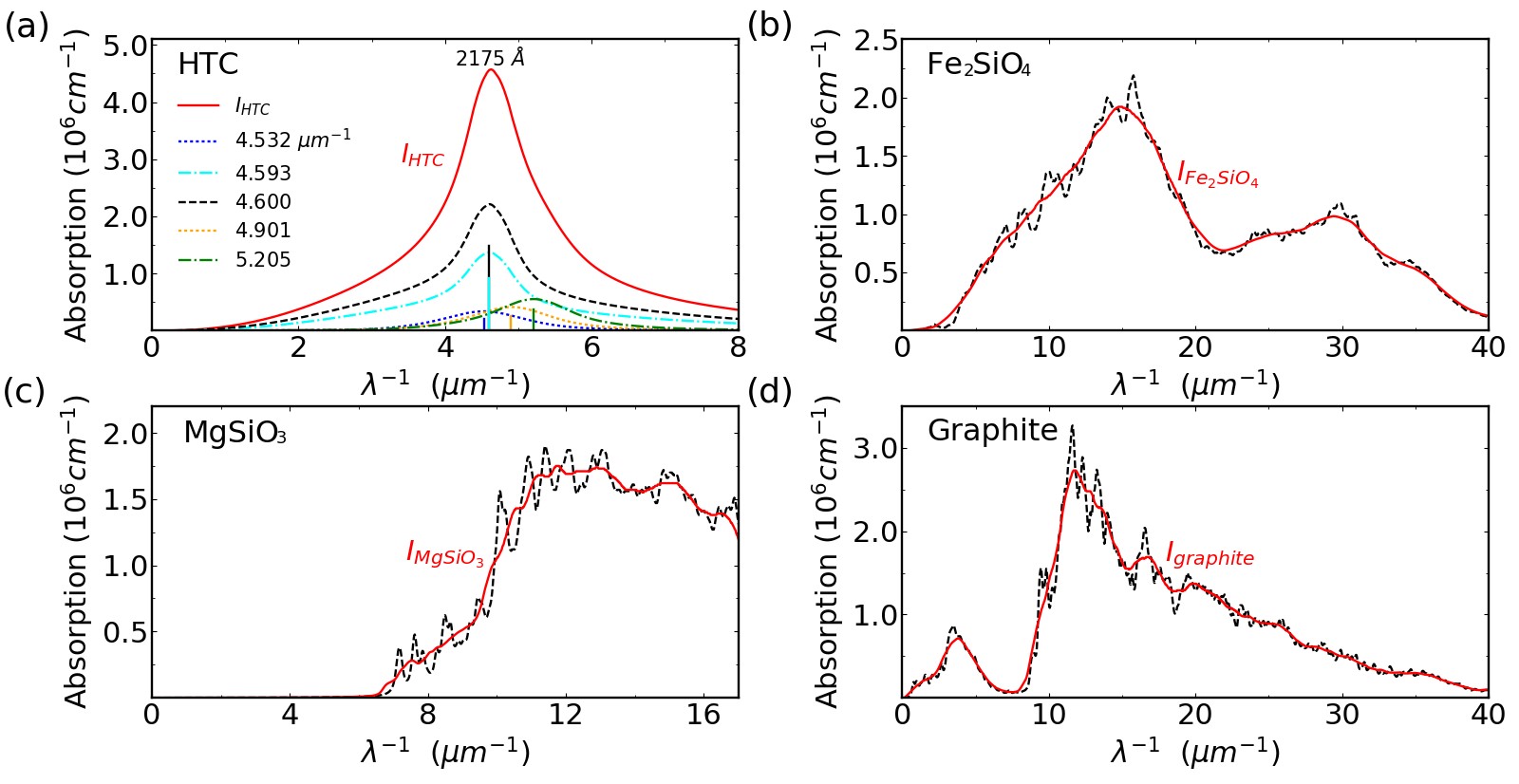 Figure 2. Calculated UV absorption spectra of HTC molecule, HTC mixtures, Fe2SiO4, MgSiO3 and graphite. (a) HTC molecule, where a strikingly sharp peak appears at the wavelength of 2175 Å. The red curve represents the overall superposed broadened absorption spectra of HTC mixtures, where the peak is positioned at 2175 Å. The straight solid lines are for HTC molecule and dashed curves are for HTC mixtures at the absorbed wavelengths labeled in the legend of (a). (b) Fe2SiO4, (c) MgSiO3, and (d) Graphite, where red solid lines represent the smoothed spectral curves by Savitzky-Golay polynomial regression.

By fitting the UV extinction curves of optional six stars (BD582292, HD239689, HD239742, HD239722, HD283800 and HD147889) with linearly combining the calculated UV absorption spectra of HTC mixtures, graphite, MgSiO3 and Fe2SiO4, they discovered that the UV extinction curves in all these stars can be perfectly fitted. To show the contributing proportion of the four ingredients in fitting the UV extinction feature bump in ISM, they take the column density ratio as an indicator. The column density ratio of carbonaceous dust (HTC mixtures and graphite) and silicate dust (MgSiO3 and Fe2SiO4) in fittings is about 0.24. 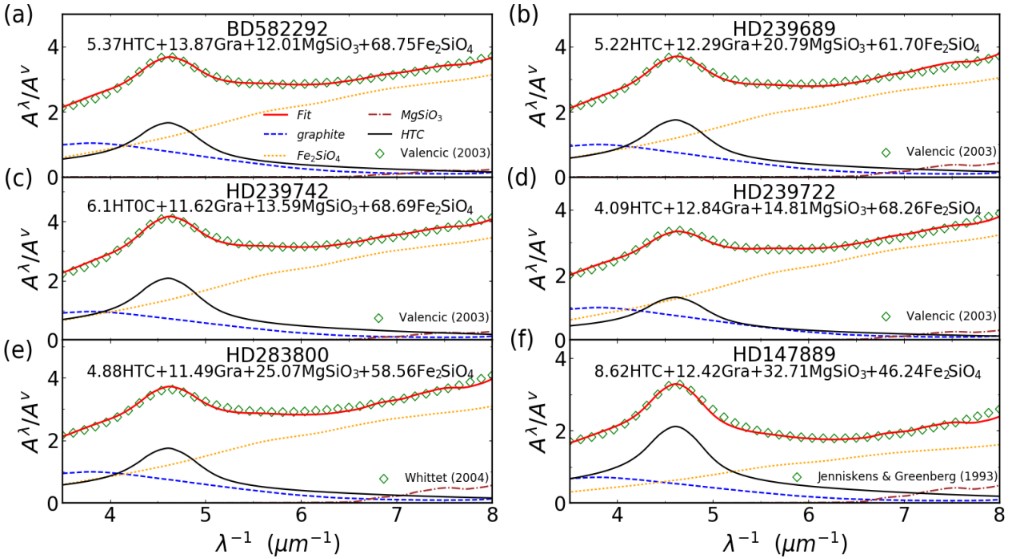 Figure 3. Fitting results for the normalized extinction curves of the six stars of (a) BD582292, (b) HD239689, (c) HD239742, (d) HD239742, (e) HD283800 and (f) HD147889. Diamonds denote the observed data adapted from the references as indicated. The red solid lines are fitting curves of the observed data. The other lines are marked in the legend of (a). The expression in each figure shows the linear fittings with different column density ratios (in percentage) of four substances (HTC mixtures, graphite, MgSiO3 and Fe2SiO4). The 2175 Å bump feature in extinction curves is greatly reproduced for the six stars. 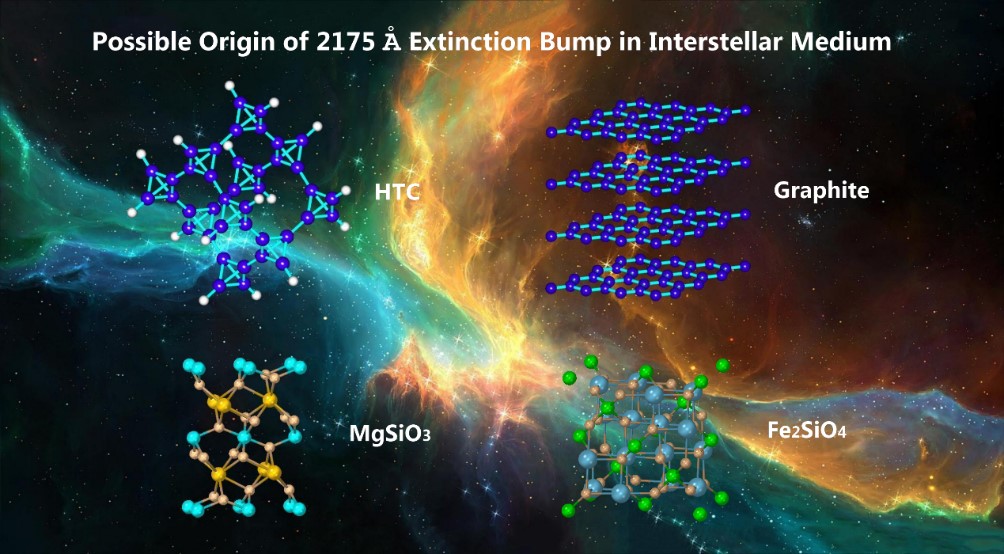 Figure 4. Possible ingredients of the interstellar medium in the Milky Way causing the extinction bump at 2175 Å. The background is a mosaic image of Nebula Galaxy taken by NASA & ESA Hubble Space Telescope (with permission).

The work gives a new possible explanation for 2175Å extinction bump in ISM, which shows that the mixtures of HTC molecules with an intrinsic prominent absorption peak at the wavelength of 2175 Å may play essential roles in explaining physical origin of the extinction bump. As this work gives an unconventional explanation toward this longstanding enigma in astrophysics, it would stimulate more observations and explorations to confirm this proposal based on HTC clusters in ISM in future.

Ma Xingyu, a Ph.D. candidate, and Zhu Yanyan, an undergraduate student at School of Physical Sciences, UCAS, made important contributions to this study. This work is supported in part by the National Key R&D Program of China, the Strategic Priority Research Program of CAS, the National Nature Science Foundation of China, and Beijing Municipal Science and Technology Commission. The calculations were performed on Era at the Supercomputing Center of Chinese Academy of Sciences.